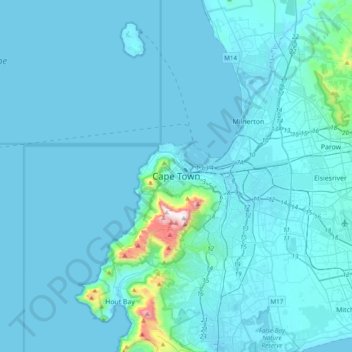 The Cape Peninsula is 52 km long from Mouille Point in the north to Cape Point in the south, with an area of about 470 km2, and it displays more topographical variety than other similar sized areas in southern Africa, and consequently spectacular scenery. There are diverse low-nutrient soils, large rocky outcrops, scree slopes, a mainly rocky coastline with embayed beaches, and considerable local variation in climatic conditions.

Click on a map to view its topography, its elevation and its terrain.

In order to remain free and to keep improving, this site uses cookies created by Google to compile visit statistics and display personalized advertisements.

How is the collected data used?